Sergio Villasenor is Native and Hybrid App Engineer, iOS and Android, specializing in Material Design and UI/UX. He will be soon rolling out the first, fully functional NODE.JS based E-Commerce platform, SapphireJS. SapphireJS is a full feature CMS, accommodating both content and product management within a easy to curate and manage User Interface.

Releasing our @nodejs #ecommerce CMS and Cart shortly, with @angularjs #materialdesign for the #uiux and @MongoDB pic.twitter.com/ueQiYrzKGS

Additionally, it will be one of the first E-Commerce platforms to support AngularJS Material Design’s User Interface, amongst other cutting edge technologies featured in the platforms stack. SapphireJS ultimately aims to provide e-commerce solutions that extend further than traditional web applications; additionally, giving companies for the first time, easy to deploy hybrid applications that can be released to both the Android and Apple marketplaces in conjunction with their web stores.
We had a talk with Sergio recently, to learn more about SapphireJS, why did he decide for his own startup, what are his thoughts on Material Design and latest technology trends. He graciously took time out of his very busy schedule to answer our questions.

Thank you for the compliment as I’ve worked hard to achieve success in the short time I’ve been developing. I believe my greatest strength is adaptability, not to a specific code base but to the people I interact with. I’ve worked alongside some of the most talented individuals in the industry, with countless great ideas; however, their inability to relate to professionals outside of the tech space or adapt to dynamic and challenging work environments ultimately lead to their down fall. That said, I do believe that a “success formula” exists, but the recipe is unique to every individual. The main ingredients are all the same i.e ideas plus effort, multiplied by ability; however, it’s the intangibles,​the spices if you will, that what make one’s output greater than or less than.
I believe the number one quality it takes to be successful in this industry is perseverance, hands down. You’re going to fail, it is how you’re able to accept failure, learn from it, grow, and become a better person, and professional. That’s the ultimate measure of success.

You mentioned, that you are working on your own project, can you tell us what is going on? Why did you decide for your own startup? What are the accomplishments of your project so far?

Yes, I am working on a closed­source technology called Sapphire. It is a MEAN­based E­Commerce CMS and platform. It is post­Beta and will be rolled out no later than Q2 of this year. It already has several service contracts and the next step is licensing negotiations with agencies that serve luxury retail brands in the 5 to 70 million dollar revenue sector. I launched this project because of my experience as the Lead Architect at OneStop Internet. OneStop holds service contracts with an array of extremely visible denim brands, but more importantly, it was because their inability to innovate that drove me to leave and pursue my own product. I consider the service contracts I’ve secured and potential licensing agreements in negotiation a huge accomplishment in a relatively short time. 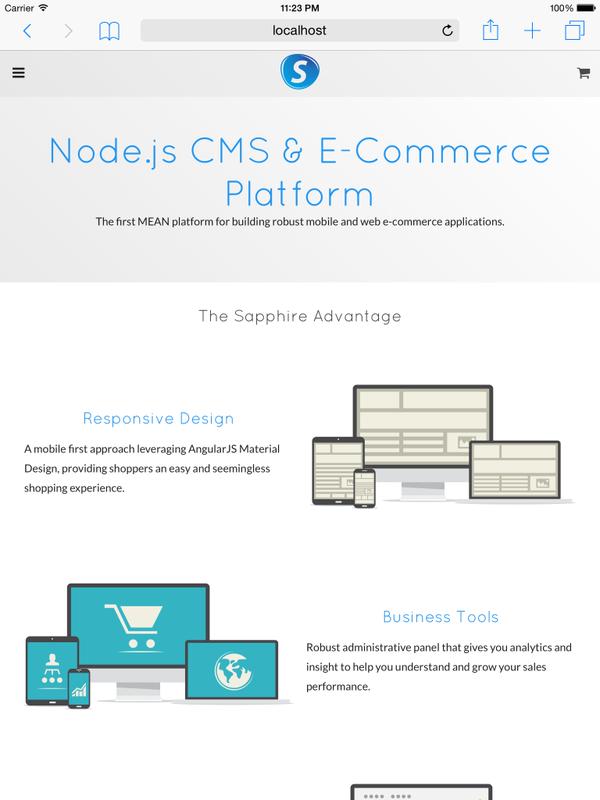 Which city do you live in? Is it a good place for internet entrepreneurs?

I live in two cities, Los Angeles and San Diego. I feel any city is a good place for “Internet entrepreneurs”. Bottom line, it is not the city that makes you, it is what you do in that city that makes YOU. The industry lends itself to working remote from any location regardless of where the employer is headquartered or the project is sourced.

What is the web design scene like in your state/country? I assume competition is quite high, right?

It is convoluted, you have designers, developers and producers all touting they are the “best” at what they do for the next recruiter in their Linkedin inbox. Personally I don’t find it competitive… if you are talented it is reflected in your work and may be easily distinguished by any potential employers or business partners.

I know, that you are big fan of AngularJS. As web developer Max Lynch said “testability,dependency injection, separation of the logic/view layer, and designer­/developer harmony are all great things developers can get behind, and Angular had it in spades”. Do you agree with that? And which are the web technologies you are using most right now, while building web or mobile applications?

I am using a MEAN stack now; however, I am not married to it. Today, yes, I believe it is the best way to build mobile and web applications, but the technology will evolve in 2­-3 years. This is and absolute in life and the reality of the industry. I do side with Lynch. If i didn’t believe in it, I would not waste my time with the technology.

How do you go about implementing new Google’s material design ? What do you like and dislike about it?

I like the scalability it provides companies while working in teams. Unlike the primitive Bootstrap, Material Design enables now typically “creative­less” developers the ability to not only build out business logic but give them a standardized, and most importantly, beautiful way of displaying that logic. I use AgugularJS Material Design, I feel the style it gives a application is robust, but most importantly it gives extended services to developers using Angular and new directives we can now leverage through out the application that give the product a very luxury feel.

Last year in WDC , Apple announced iOS8. One of the most exciting and expansive releases of iOS since it debuted in 2007. Out went Steve Jobs’ beloved skeuomorphism and in came minimalist flat design. By contrast Android 5.0 Lollipop represents the biggest redesign in Android history. But unlike iOS, Material Design is more than respray. It is an ideology and new way of thinking about design ( web ​and mobile combined). What are your thoughts on this?

People are attracted to beautiful and engaging interfaces, that’s human nature. Whether it is Apple or Google pushing Android technologies is immaterial. I love the attention to detail and appreciate the ability to provide users a standardized interface they can relate to and visually connect with.

What do you think the future of web design holds? What is the significance of material design in the modern web design era?

If i could predict the future I’d be in a different business…. the future is unknown. We have tools that empower us as developers to make better products today, material design being one, it will have an impact as long as we engage the consumers of our products and they are receptive to the products we develop.

If you would like to find out more about SapphireJS, Sergio can be reached anytime via Email or on Twitter